Tiny Comforts in the NICU

I don’t know about you but I generally have mild anxiety whenever I enter a hospital. That might be because I really haven’t had a lot of experience in them. In fact, basically my only point of reference is when I did a tour of the hospital when I was pregnant and at that point I immediately decided I would do a homebirth. Yep that’s how bad that hospital was.

But thankfully not all hospitals are created equal.

I recently made a visit to Mount Sinai Hospital in Toronto. I’ve been an ambassador for the hospital ever since I moderated a chat about the incredible healing powers of breast milk in support of their incredible milk bank. I was honoured to be invited to do a tour of the Newton Glassman Charitable Foundation Neonatal Intensive Care Unit (NICU) in advance of World Prematurity Day.

To be honest, what I found there completely surprised me. 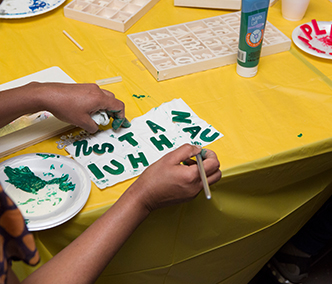 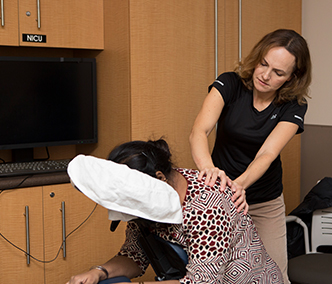 My first stop was a dimly lit room filled with parents who have babies in the NICU. In one corner of the room there was a table filled with warm drinks and treats. In the other, there were two massage seats set up where both mothers and fathers were indulging in a bit of touch therapy. The rest of the parents were all sitting around a table painting picture frames. Janet Narciso, a parent resource nurse in the NICU, explained to me that this small creative activity is a wonderful way to allow these parents a moment of reprieve in the midst of this incredibly challenging time. 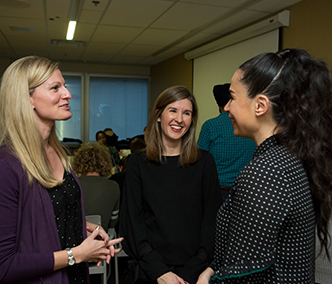 Above: Cynthia chats with Gillian and Lia

I then met two volunteers, Gillian and Lia, who were mothers who had previously had their children in the NICU and are part of the parent advisory council. I listened as they told me their stories of fear that transformed into hope and then gratitude while having their vulnerable babies cared for here. They felt that the care they received while their babies were in the NICU was so life changing that they wanted the pleasure of “paying it forward” to other parents who were going through similar experiences.


Next, I had the privilege of meeting one mother, Kat, who had recently given birth to twins prematurely and one of her babies, Dylan, was being cared for in the NICU at Mount Sinai. My heart leapt out of my chest as we stood near him in his little tiny house (as his big brother calls it) and watched him sleeping. 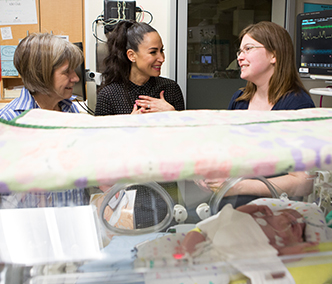 What amazed me was the devoted attention: each nurse was looking after only a handful of babies at a time. And not only that - there are monitors and mobile phone alerts set up to each nurse allowing quick response to the parents and to alert them of any changes with the baby. As I was listening to Kat and her mother tell me about their nurses, I realized it’s these tiny things that mean the world to the family members.

After all, time slows to almost to standstill when you have a child in crisis. The one thing that I learned from talking to all of these mothers was that the thing that keeps you going in times of crisis is hope. All of the parents I spoke with sung the praises of the incredible staff at this hospital who truly embrace their role as ‘care’givers.

They also have several programs led by volunteers including journey beads that are given to mothers and babies who have reached certain milestones in growth. Community organizations like “Angel Gowns made with love” get donated old wedding dresses that will be made into gowns for the babies who don’t pull through. There is also a Cuddler program - where you literally help comfort and sooth these little ones by just holding or reading to them when parents are away.

I couldn’t help think of that expression: God is in the details. What a wonderful thing that this hospital has figured out how to create beams of light in the darkest of times.